Screening of Dawnland at UU Church 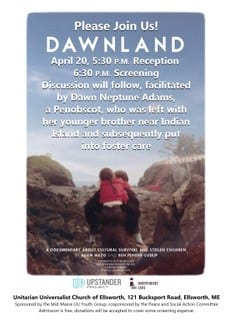 The Mid-Maine Unitarian Universalist (UU) Youth Group and the UU Peace and Social Action Committee are organizing and presenting a showing of the documentary, Dawnland. The film will be shown at the UU Church of Ellsworth at 121 Bucksport Road, Ellsworth, on Saturday, April 20.  A reception will be held at 5:30 PM before the 6:30 PM showing of the 86-minute film. The documentary will be followed by a Q & A discussion facilitated by Dawn Neptune Adams.

Dawn lived on Indian Island, a reservation of the Penobscot Nation. When she was a 4 year-old child, she and her younger brother were abandoned by a baby sitter near the reservation and, as a result, entered the foster care system. She was subjected to extreme prejudice, punishment, and attempts to eradicate her Penobscot heritage.

The Mid-Maine UU youth are from the four UU churches of Ellsworth, Bangor, Belfast, and Rockland. They have spent the past year learning about our Wabanaki neighbors. They meet once a month and have had two weekend learning retreats with one more to follow on April 19-21. The youth will spend the Saturday of that weekend at the Abbe Museum. The intention of the program is to expand their awareness of Maine’s indigenous peoples and the external forces affecting them.

The Upstander Project, that supported the making of this film, had this to say about Dawnland:

“For most of the 20th century, government agents systematically forced Native American children from their homes and placed them with white families. As recently as the 1970’s, one in four Native children nationwide were living in non-Native foster care, adoptive homes, or boarding schools. Many children experienced devastating emotional and physical harm by adults who mistreated them and tried to erase their cultural identity.

Now, for the first time, they are being asked to share their stories.

In Maine, a historic investigation—the first government-sanctioned truth and reconciliation commission (TRC) in the United States—begins a bold journey. For over two years, Native and non-Native commissioners travelled across Maine. They gather testimony and bear witness to the devastating impact of the state’s child welfare practices on families in Maliseet, Micmac, Passamaquoddy and Penobscot tribal communities. Collectively, these tribes make up the Wabanaki people.

The feature-length documentary Dawnland follows the TRC to contemporary Wabanaki communities to witness intimate, sacred moments of truth telling and healing. With exclusive access to this groundbreaking process and never-before-seen footage, the film reveals the untold narrative of Indigenous child removal in the United States.

The TRC discovers that state power continues to be used to break up Wabanaki families, threatening the very existence of the Wabanaki people. Can they right this wrong and turn around a broken child welfare system? Dawnland foregrounds the immense challenges that this commission faces as they work toward truth, reconciliation, and the survival of all Indigenous peoples.

For most of the 20th century, government agents systematically forced Native American children from their homes and placed them with white families. A 1977 US Senate found that as recently as 1975, Native children in Maine were (19) times more likely to be removed by child welfare workers than non-Native children. Many children experienced devastating emotional harm in homes that shamed, demeaned, and erased their culture.

Many Native people describe this persistent child welfare crisis as ongoing genocide resulting in cultural, emotional, and financial devastation—a stark contrast to most outsiders who are ignorant, misinformed or unaware of these abuses.

Maine-Wabanaki REACH is featured in Dawnland. The organization advances Wabanaki self-determination by strengthening the cultural, spiritual and physical wellbeing of Native people in Maine. REACH initiated the Maine Wabanaki-State Child Welfare Truth and Reconciliation Commission and is carrying out its recommendations currently.

The guiding principle in these boarding schools was “kill the Indian, and save the man”, Captain Richard H. Pratt of the 10th Cavalry Buffalo Soldiers and founder of the Carlisle School for Indian Student on the education of Native Americans. Beginning in 1887 the federal government began its efforts to “Americanize” Native Americans through the use of education to be white, and punishment to be Indian.

For most of the 20th century, government agents systematically forced Native American children from their homes and placed them with white families. Many children experienced devastating emotional harm in homes that shamed, demeaned, and erased their culture.

All are welcome to attend. There is no admission fee, but donations will be gladly accepted to support screening of this film. Please contact Doug Bird at 479-6652, or Jeff Jeude, UU Church Administrator at 667-4393.