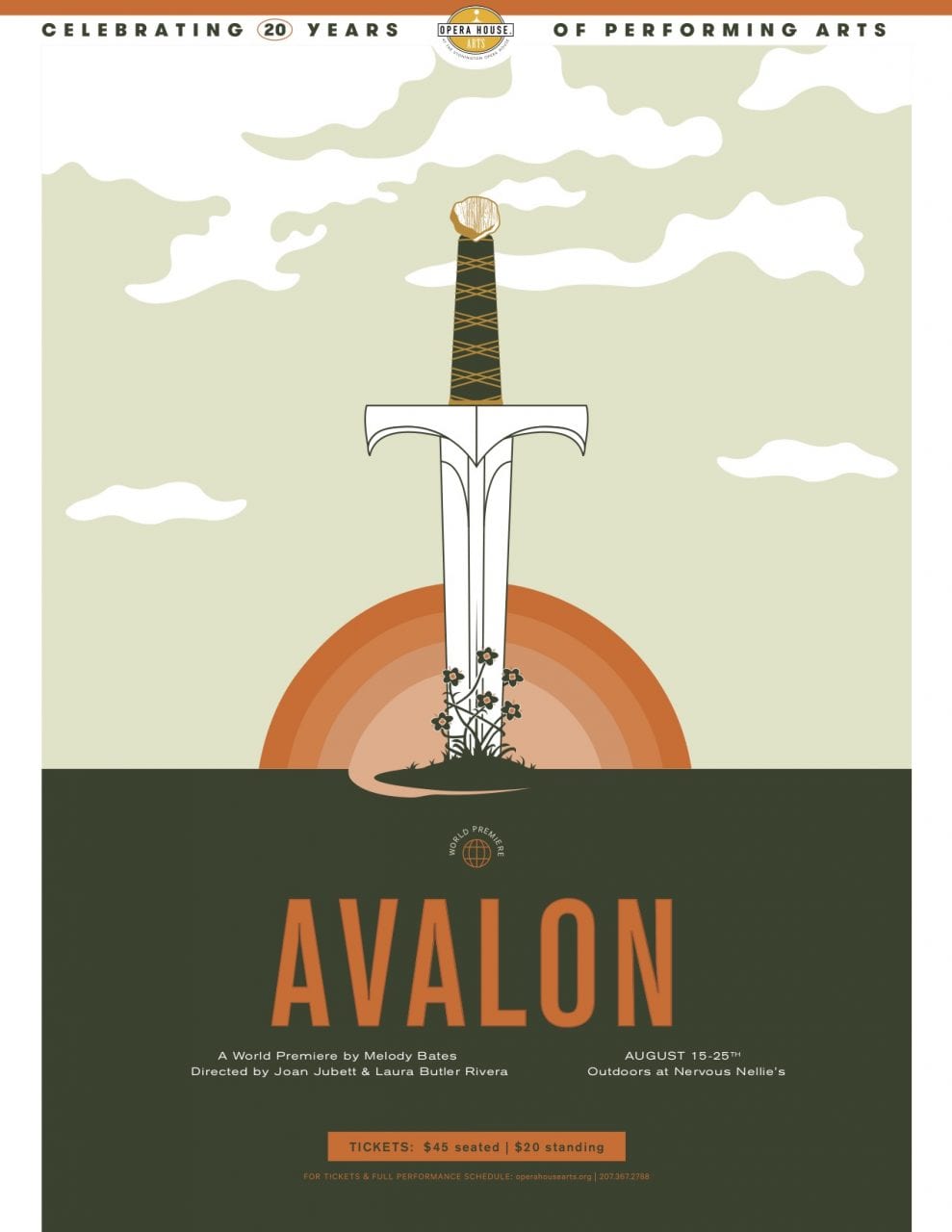 STONINGTON— Opera House Arts (OHA) is thrilled to announce the second mainstage of its 20th anniversary season, the world premiere of Avalon, to be performed outdoors at Nervous Nellie’s on Deer Isle, August 15-25 at 5:30pm. Avalon is an original play by Melody Bates, commissioned by OHA, and developed through workshops and residencies over the past two and a half years. Joan Jubett, Laura Butler Rivera and April Sweeney co-direct an Avalon cast of 8 who have been joined by a company of local community members to help tell this old story anew. OHA’s former Artistic Director and co-founder, Judith Jerome, serves as dramaturg for the production.

Welcome to Avalon, isle of apples, where myth and magic meet humanity and nothing is as it seems. But what becomes of a partnership world, abundant and whole as an apple, when it stands ripe for the taking? This imaginative retelling of the Arthurian legend explores this question and more as it unfolds among the wondrous sculptures of local artist Peter Beerits at Nervous Nellie’s.

“The crown is a lure. A golden thing in the depths that all the fishes bite at. And behind them, the men with hooks, who would wield that golden thing without wearing it themselves… A poisonous thing is a crown”, says the character of Morgana in Avalon, an original play by Melody Bates.

In addition to producing extant plays over the past twenty years, Opera House Arts has built a legacy of cultivating both original and site-specific work. This year, audiences can witness the world premiere of playwright-performer Melody Bates’ reimagining of the Arthurian legend, Avalon, set in the outdoor sculpture park that is co-creator Peter Beerits’ beloved “Nellieville”. This immersive play spirits audiences along the grounds, both magical and haunting, creating a singular atmosphere for this bold new work to be born.

Melody Bates is thrilled to bring Avalon to life in partnership with OHA, Peter Beerits, and this extraordinary company. Her past OHA productions include:  A Midsummer Night’s Dream, Merry Wives of Windsor, Mr. Burns, Taming of the Shrew, Measure for Measure, Macbeth, Twelfth Night, Cleopatra in Antony & Cleopatra, and Juliet in R & J & Z, which she also wrote. She is a 3-time winner and 11-time nominee for the NY