Ladies of Native Comedy at the Criterion Theatre 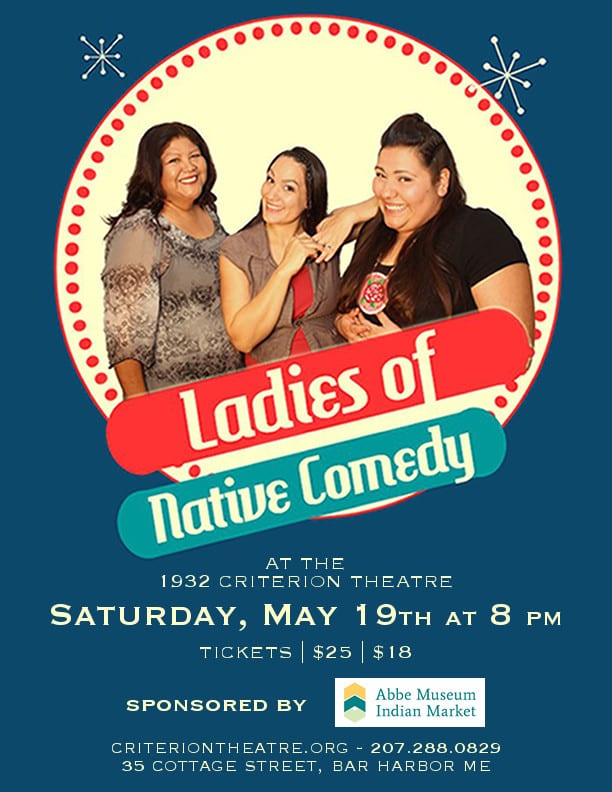 Bar Harbor—The Ladies of Native Comedy will perform at the 1932 Criterion Theatre on Saturday, May 19th at 8 p.m., sponsored by the Abbe Museum Indian Market. Adrianne Chalepah, Teresa Choyguha, and Deanna MAD will share hilarious perspectives on life as they see it.

Adrianne Chalepah is an entertainer and writer originally from Anadarko, Oklahoma. Her comedy career took off when she teamed up with the popular comedy troupe 49 Laughs Comedy in 2010; since then she has been featured on television, in magazines, and in live events, such as opening for First Lady Michelle Obama in 2012. She is an enrolled member of the Kiowa Tribe of Oklahoma and is also Plains Apache.

Teresa Choyguha is the winner of Best Actress at the Winnipeg Aboriginal Film Festival for her role in the acclaimed independent film “More Than Frybread” and in her comedy career she uses humor to connect with people of all cultures. She is a citizen of the Tohono O’odham Nation in southern Arizona.

Deanna MAD is a high-energy, powerful comedian who brings a “tell it like it is” attitude to the storytelling of her life. She is unafraid of talking taboo and is dedicated to questioning social norms. She is a member of the Wolf Clan of the Tonawanda Seneca of New York.

Seats in the Balcony and Front Center Orchestra sections are $25 and General Orchestra seats are $18. Tickets will go on sale for members on 4/25 and for the general public on 4/26 at criteriontheatre.org and 207-288-0829.