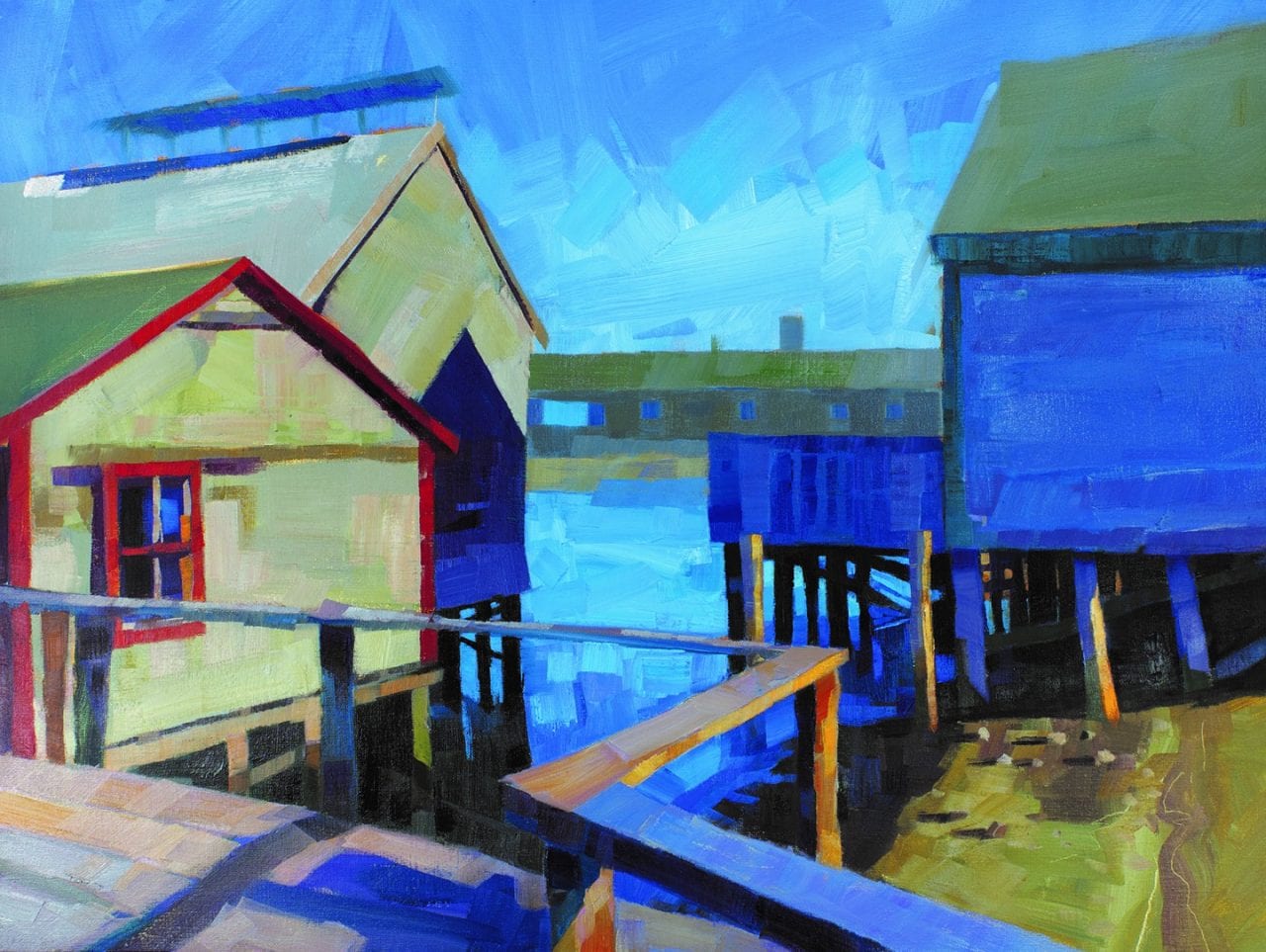 Courthouse Gallery is located at 6 Court Street in Ellsworth. For more information on upcoming shows call (207) 667-6611, or visit www.courthousegallery.com

Philip Frey: Soft Persuasion  Philip Frey is best known for his bold paintings of Maine’s coastline, landscape, and working waterfronts. His primary focus is color and light, preferring direct perception and the dynamic quality, richness, and challenges of working from life. In 2016, the University of Maine Museum of Art mounted a solo exhibition of Frey’s work. His work has been highlighted in several books, including Art of Acadia, 2016, and Paintings of Portland, 2018, both by brothers Carl Little and David Little.

Frey’s career is the subject of a new book: Philip Frey: Here and Now (Marshall Wilkes) by Daniel Kany and Carl Little. Courthouse Gallery will host the book launch in conjunction with his solo show on Saturday, July 7 from 4–6:30pm. Kany sums up Frey’s work best, “As a painter, Philip Frey’s goal is often a project of soft persuasion. We recognize his scenes easily enough. But as we shift our focus from the recognizable subject to the insistent forms, luscious brushwork, and compositional design, the painting slips out of representational focus and back to abstraction, the true place of Frey’s poetry.” Frey lives in downeast Maine, where he maintains a full-time studio nestled in the woods. To reserve a copy of Philip Frey: Here and Now, please call Courthouse Gallery at 207-667-6611. Images available on request.

Judy Belasco: The Mystery of Water  Judy Belasco paints subtle, yet majestic coastal scenes most often of estuaries where the interplay of water, sky, and light are shaped by atmospheric weather. As the daughter of Oliver Nuse, a Philadelphia artist, and the granddaughter of Roy Nuse, an impressionist painter and instructor at the Academy of Fine Arts in Philadelphia, Belasco grew up surrounded by art. She spent much of her childhood living in artists’ colonies in Germantown, Pennsylvania, Gloucester, Massachusetts, and Maine. In 1972, she graduated from the Philadelphia College of Art with a BFA. She studied landscape painting with noted artist Linden Frederick and fine digital print with John Paul Caponigro at the Maine Photographic Workshop. Belasco was an art teacher at the Germantown Friends School, a position she held for thirty-two years. In 2008, she retired to focus on her painting full-time. Belasco maintains studios in Philadelphia and Stockton Springs, Maine, and divides her time between two. “‘The longer you look,’ Belasco has said, ‘the deeper and deeper you go.’ The same can be said of these remarkable paintings. They draw us into landscapes we thought we knew but now see with greater depth and renewed wonder.” —Carl Little, catalog except 2018

Philip Barter: Mainescapes  Philip Barter is a self-taught artist from Boothbay, Maine, who was living in California during the 1960s when he met Alfonso Sosa, an abstract expressionist painter. Sosa took Barter under his wing and added a “charge of light and color” to Barter’s vision that influenced his work for the next fifty years. While living out west, Barter encountered the work of Marsden Hartley and experienced an aesthetic epiphany. He felt an immediate connection with the Lewiston-born painter. Hartley would serve as a kind of talisman, an artist to inspire but also to move beyond. Barter returned to Maine to become a painter and by the 1970s, he and his second wife, Priscilla, settled in downeast Maine, where they raised their seven children and made a life immersed in art for their large family. By the early 1990s Barter was showing in prestigious galleries up and down the Maine coast and receiving critical acclaim for his work. Bates College Museum of Art mounted a retrospective of Barter’s work in 1992. The Farnsworth Museum, the Portland Museum of Art, and Bates acquired his work. In 1995, Barter was the subject of a feature profile in Down East magazine, and Tim Sample highlighted Barter’s life in art in one of his “Postcards from Maine” segments on the CBS Sunday Morning program hosted by Charles Kuralt. Barter has since spent a half-century painting narratives based on Maine’s fiercely independent people and the landscape of his home state, becoming the “painter laureate” of the region. In 2017, Marshall Wilkes published Philip Barter: Forever Maine, a comprehensive hard cover book by Carl Little on Barter’s work and career.