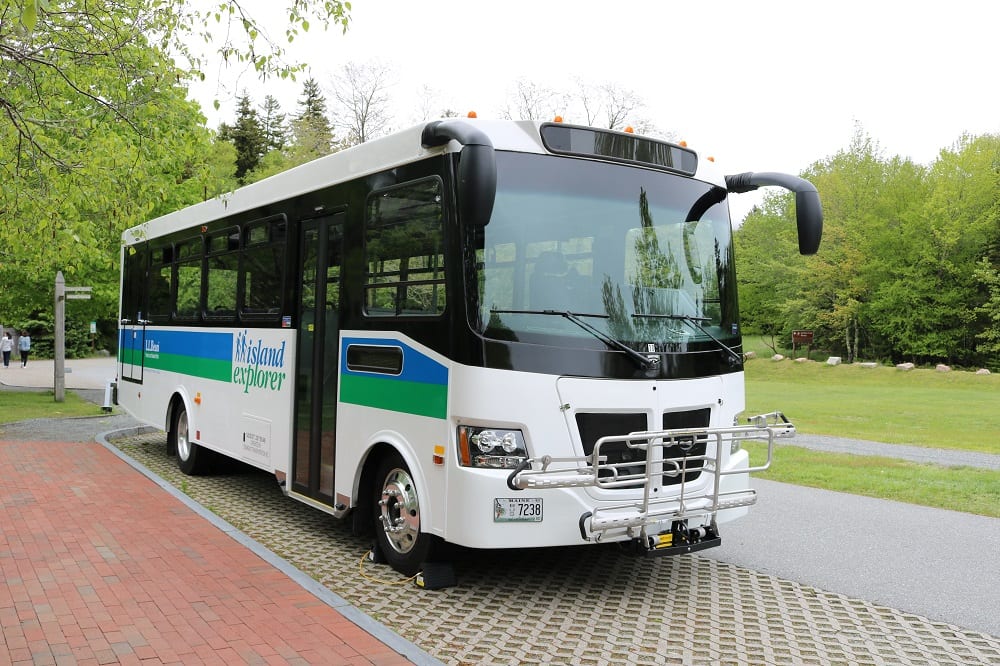 Mount Desert– Partners of the Island Explorer bus system gathered Friday, June 14th to celebrate the 20th Anniversary of the Island Explorer bus system and the integration of 21 new propane-powered buses into the fleet. The Island Explorer is a fare-free transportation system linking hotels, campgrounds, and inns with destinations in Acadia National Park and area villages. Since 1999, the bus system has carried over 7.7 million passengers, reduced private automobile traffic by more than 2.9 million vehicles, and prevented the emission of an estimated 41 tons of smog-causing pollutants and 27,000 tons of greenhouse gases. The Island Explorer began operating on the Schoodic Peninsula Memorial Day weekend and will begin serving Mount Desert Island and Trenton beginning on June 23rd this year.

“The Island Explorer has always been and will continue to be a very important part of the visitor experience at Acadia,” said Acadia National Park Superintendent Kevin Schneider. “Thousands of visitors use the system each year to access hiking trails, the carriage roads, and other destinations in a safe, convenient manner. It’s been an incredible 20-year partnership with the Maine Department of Transportation, the U.S. Department of Transportation, local towns, L.L.Bean, Friends of Acadia, Downeast Transportation, and more.”

One of those partners is outdoor retailer, L.L.Bean, which has pledged more than $4 million to the bus system since 2002. Shawn Gorman, Executive Chairman of the Board of L.L.Bean, spoke at the Jordan Pond event. “Our mission has always been to help more people be able to enjoy the outdoors,” remarked Gorman. “The Island Explorer is a natural partnership for us, since it also helps millions of people access Acadia’s tremendous outdoor recreation opportunities. L.L.Bean is very proud to be a longtime supporter of the bus system’s success, as well as an ongoing partner of the National Park Foundation.”

The Mount Desert Island League of Towns also played a significant role in the founding of the Island Explorer. The League of Towns is a loose affiliation of the town managers from the municipalities surrounding the park. The League submitted the original grant application to secure funding for the initial eight Island Explorer buses, and many of the participating towns make annual contributions to support the Island Explorer’s operations. Fred Ehrlenbach, Vice-Chairman of the League spoke at the Jordan Pond event and said, “This is what can be accomplished when municipal, state, and federal governments work together with the private sector.”

Friends of Acadia’s President David MacDonald echoed the importance of the Island Explorer to the quality of life for residents and visitors.  “Over two decades and millions of passengers the Island Explorer has helped to reduce congestion and pollution, clearly becoming an integral part of the Acadia experience,” said Friends of Acadia President and CEO David MacDonald. “This latest purchase of new equipment, and continued support by the Park Service, the State of Maine, L.L.Bean, FOA and the broader community clearly signals that the Island Explorer will continue to play a vital role in helping to address traffic and transportation issues going forward.”

Members of the Maine Congressional delegation were not able to attend the event at Jordan Pond, but they sent congratulatory remarks.

Murphy also thanked the Propane Education and Research Council (PERC) for the organization’s assistance in seeking manufacturers willing to develop and build the 21 new propane-powered buses to be integrated into Island Explorer operations this year. The previous Island Explorer bus models were no longer being manufactured, so Downeast Transportation (DTI) had to find a new supplier. PERC helped connect DTI to Hometown Manufacturing, a Wisconsin third generation owned, woman-owned business, who constructed the new buses, which were sold through the distributor, Alliance Bus. “Today Acadia National Park continues to lead the way with its commitment to clean air and a better and healthier environment using propane-fueled buses. These propane buses enhance the park experience for everyone because they are cleaner, quieter, and efficient.  Propane is an important part of the emerging clean energy economy and it is an important part of America’s clean energy mix.  I want to commend Acadia National Park for its innovative leadership and good stewardship of its economic and environmental resources by increasing propane buses in the park,” said Tucker Perkins CEO for the Propane Education & Research Council.

Funding for the new buses was supported by the National Park Service and the State of Maine and the acquisition was managed by the Maine Department of Transportation in conjunction with Downeast Transportation. “Easy, hassle-free travel is part of Maine’s state brand,” said Maine Department of Transportation Commissioner Bruce Van Note. “The Island Explorer is a key component to that brand, enabling visitors from all over the country and world to enjoy the natural beauty of Acadia National Park and surrounding region with ease. I am honored to join in the celebration of 20 years of partnership, collaboration, and success, and look forward to decades more.”

Annual operating funding for the Island Explorer is in partnership through Acadia National Park, the U.S. and Maine Departments of Transportation, contributions from L.L.Bean and Friends of Acadia, local municipal appropriations, fees from businesses that receive front door service, and passenger donations. A portion of every weekly and annual Acadia National Park entrance fee is dedicated to funding the Island Explorer’s operations.

Island Explorer information and schedules are available online at www.exploreacadia.com. A mobile phone application showing the location of Island Explore buses can be downloaded at islandexplorertracker.availtec.com.