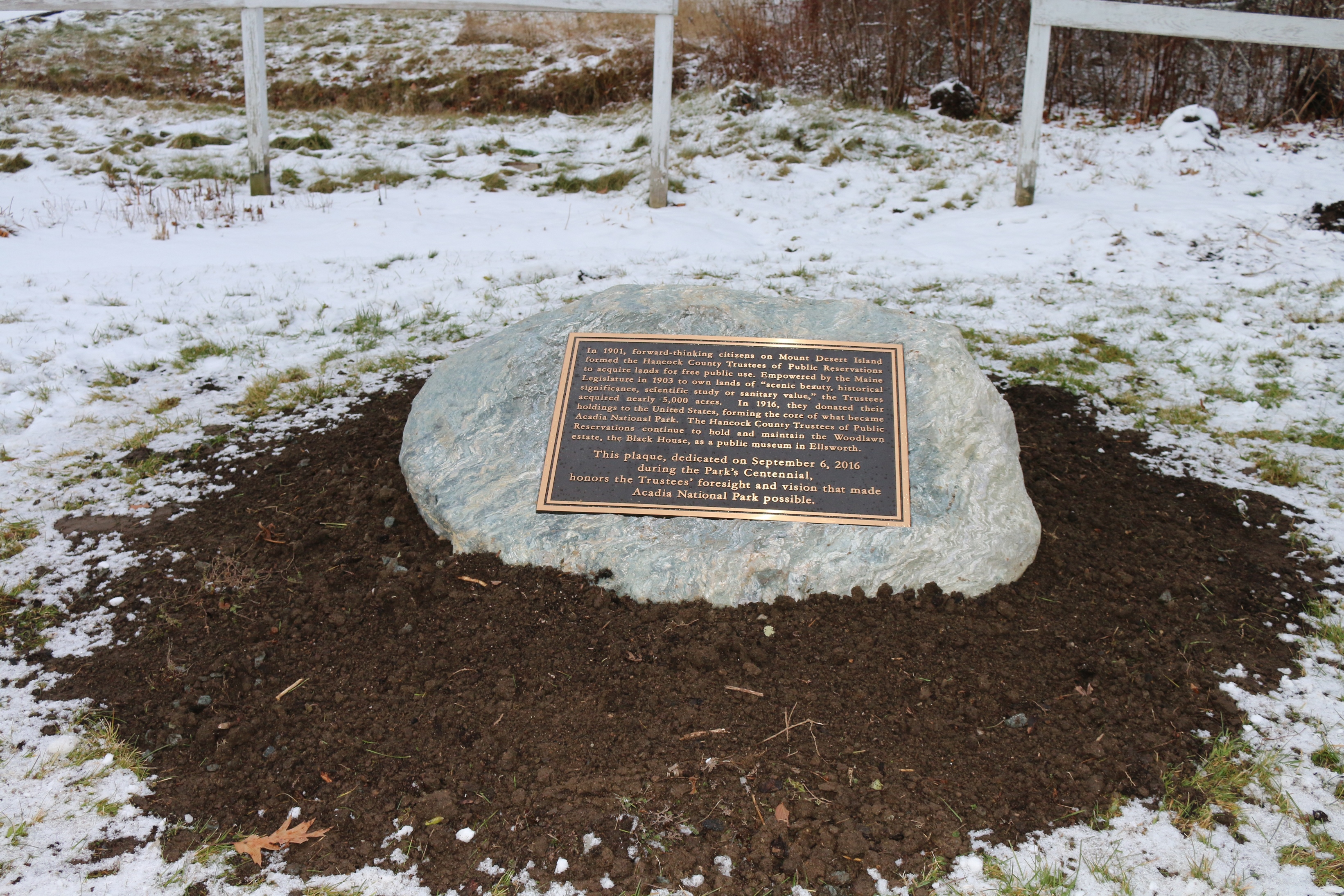 The Hancock County Trustees of Public Reservations (Trustees), governing body of Woodlawn in Ellsworth, now has two historical markers on public display recognizing the significant role they played in the formation and establishment of Acadia National Park (ANP).

On September 6, the first historical marker was dedicated at the Blue Hill Overlook on Cadillac Mountain in conjunction with the 2016 ANP Centennial Celebration.  On December 7, a replica of the marker was placed in the cutting garden at Woodlawn. The markers were installed by Freshwater Stone of Orland, Maine.

In 1901, forward-thinking citizens on Mount Desert Island formed the Hancock County Trustees of Public Reservations to acquire lands for free public use. Empowered by the Maine Legislature in 1903 to own lands of “scenic beauty, historical significance, scientific study or sanitary value,” the Trustees acquired nearly 5,000 acres. In 1916, they donated their holdings to the United States, forming the core of what became Acadia National Park. The Hancock County Trustees of Public Reservations continue to hold and maintain the Woodlawn estate, the Black House, as a public museum in Ellsworth. In 2016, they donated their remaining 2 acres, near Seawall and within the Park boundary, to the United States for inclusion in Acadia National Park.

According to the Trustees current president, Terry L. Carlisle, “The history of the Trustees is fascinating and not well known. In fact, one hundred years have passed since they donated the core lands that became Acadia National Park. These two markers are the first public recognition of their hard work, foresight and vision that ensured public access to thousands of acres of scenic land.”

To learn more of the history of the Trustees, Woodlawn has just released an updated version of an original pamphlet published in 1939 and titled, The Hancock County Trustees of Public Reservations: An Historical Sketch and a Record of the Holdings of the Trustees.  The publication is currently available in the Woodlawn Gift Shop and in coming weeks you will be able to purchase a copy online at woodlawnmuseum.org.

Healthy Acadia Offers Tips for Eating Better on a Budget