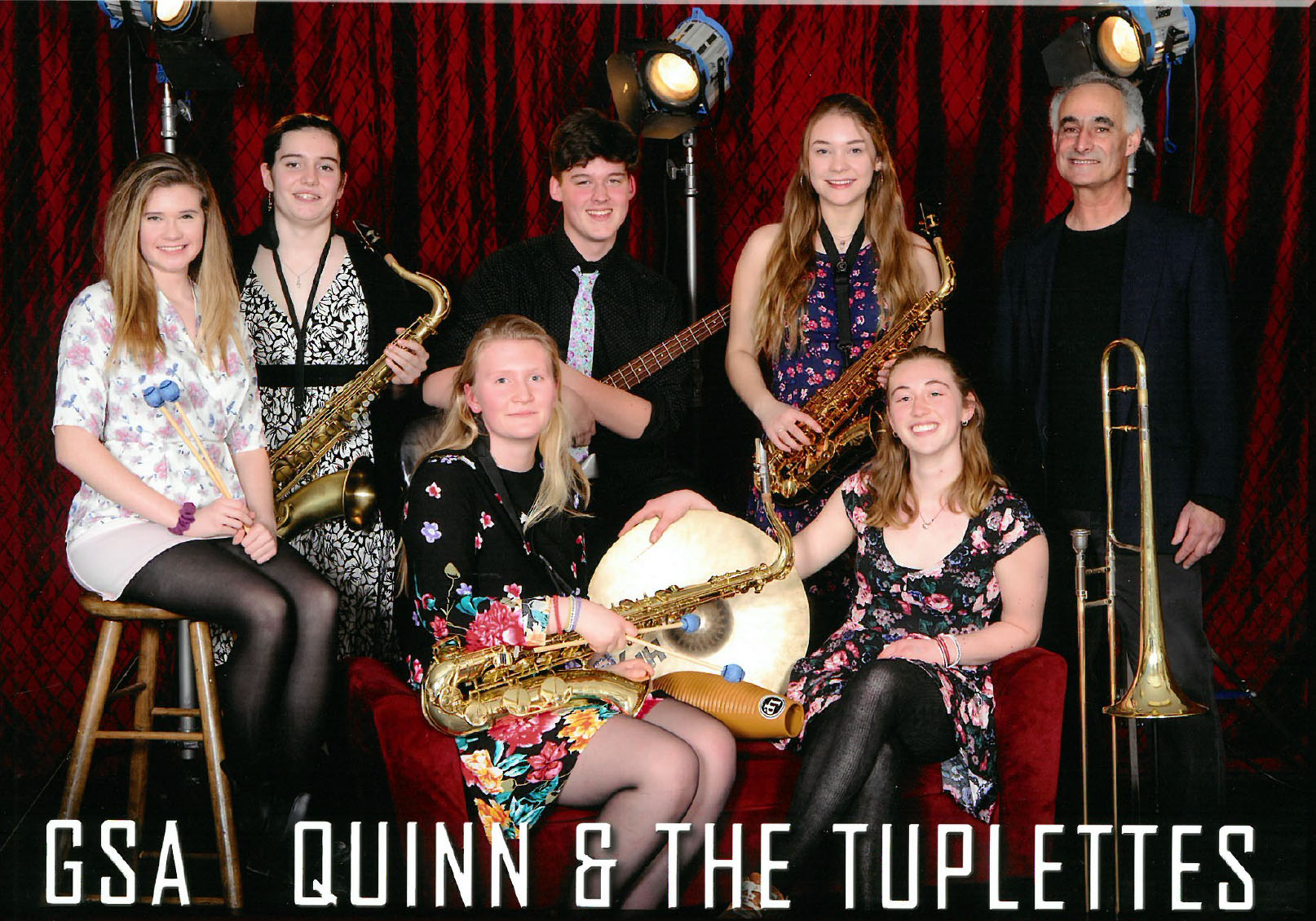 Continuing a 15-year Tradition, “Quinn and the Tuplettes” to open for David Virelles and Román Díaz on August 3rd

Ellsworth –  When Quinn & the Tuplettes hit the stage as the opening act of the 18th Annual Deer Isle Jazz Festival at 7pm on Friday August 3rd, they will be taking part in a tradition that has developed over the 15 years that George Stevens Academy and Opera House Arts have partnered on the Deer Isle Jazz Festival.

“It’s like a farewell performance for our seniors,” says Steve Orlovsky, director of GSA’s jazz program. “I tell them, ‘you walk in June, but you don’t really graduate until you’ve done this.’ It’s the last duty of our graduating seniors.”

In 2004, Linda Nelson, one of the founders of Opera House Arts, reached out to Orlovsky and invited him to bring his elite jazz ensemble to the Stonington Opera House to open the festival, then in its fourth year. That year, the GSA’s Black Note Fever Combo opened for the Lewis Nash Trio and Heather Cornell. Since then, GSA student-ensembles have opened for some of the biggest names in jazz, from Kenny Barron and Randy Weston, to Evan Christopher, Nicole Mitchell and Dafnis Prieto. This year, the six students who make up the honors combo – Isla Brownlow, Nellie Haldane, Erika Hipsky, Sophia Steinbarger, Elana Williamson and Quinn Stabler – will open for David Virelles and Román Díaz.

Three of the students in this year’s combo are seniors. Isla Brownlow, who plays trombone and drums, played in the festival last year as well, and remembers the concert as being one of the more exciting venues she has played.

“There’s a big crowd, we’re opening for this professional act,” she remembers. “We’re at this great venue and we’re expected to be so good – and then after the concert, people were coming up to us, surprised that we are that good.”

The students of George Stevens Academy are good – and as a student body, they are highly involved in the music program. When Steve Orlovksy started at GSA in 1987, the music program was in its infancy. “There wasn’t any jazz, and they were just really trying to establish a band,” Orlovsky remembers.

Over the past 32 years, the program has grown: in a school of about 320 students, 70-75 take part in the band and jazz combos, and an additional 20 students play with the steel band.

Graduating senior Sophia Steinbarger, who plays tenor, baritone and alto sax, notes that her music helps her academics as well. “If I play music in my spare time, it helps me focus on work. I think it also enhances my ability to study. If I have a hard class – like if I come out of calculus – and I go and have a rehearsal with my group or practice on my own, it helps reset my mind and get me ready for my next class.”

This sentiment is echoed by Nellie Haldane, who plays piano, vibes and tenor sax in this year’s combo. “Whenever I get into a tough situation or get results from something I’m not happy with, music is a way for me to get over it. The first time I didn’t get into the combo I went home and banged out some songs on the piano and felt better after that.”

For these young musicians, jazz is a way a honing and refining their artistry. Brownlow started a rock band in the 7th grade before finding jazz in high school. “In a rock band, I could be as loud as I wanted. I had to have a steady beat – to be solid for everyone else. In Jazz, it’s more about improvising and changing up the groove you have.”

Haldane enthuses about the focus needed to play. “It is mostly listening and paying attention. We listen and make eye contact and make sure we are all together – but we do surprise each other. You don’t always know what someone is going to play and they come out with this crazy good solo and you weren’t expecting it and it just adds to this energy.”

The Deer Isle Jazz Festival is often the first professional gig for students in GSA opening act – and many of these students go on to exciting professional careers. The opening act for Saturday’s concert at the festival features Joseph Boulet, a recent graduate of GSA who played the Jazz Festival for three years, and Peter Apfelbaum, a renowned musician who met Boulet when GSA opened for him as part of Dafnis Prieto’s So O Si Quartet. The pair will be joined on Sunday August 5 by Ross Gallagher, another GSA alum, for an intimate concert at GWatson Gallery.

“To be part of the Deer Isle Jazz Festival is something that these students will always remember and cherish,” says Orlovsky.

Peter Richards, the Interim Artistic Director of Opera House Arts, agrees. “It’s a wonderful opportunity for the students, and a rewarding partnership for the Opera House,” he says.  “We love bringing our local students and world-class professionals together under the same roof.”

Tickets for the Deer Isle Jazz Festival are available for $25, $30 or $40, and can be purchased online, by phone, or in person at the Opera House Box Office, at the corner of Main and School Streets at the base of the commercial fish pier in downtown Stonington (Monday-Friday from 11 a.m. – 5 p.m.).

Programs sell out and advance ticket purchases are strongly recommended. To purchase tickets online, or for further information and a full schedule of events, including ticket prices and OHA’s “Island Students Free” policy, visit the Opera House online at www.operahousearts.org.

Opera House Arts, a 501(c)(3) nonprofit organization, was originally established to restore the historic Stonington Opera House, on the National Register of Historic Places, to its original role as a center for performance and a community gathering space. Now in its 18th year, OHA produces live theatre, music and dance in both the Stonington Opera House, and on our second stage, the restored Burnt Cove Church Community Center.