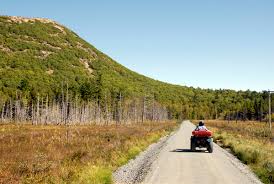 ELLSWORTH – The Downeast Sunrise Trail (DEST) has now been completed with addition of the final two miles from Hancock into Ellsworth, after a quarter century of work. Commissioners from two collaborating state agencies and community partners will be on hand December 2 for a ceremonial ribbon cutting commemorating the event. The ceremony, hosted by the Sunrise Trail Coalition, Inc. and the City of Ellsworth, will take place at the new High Street Trailhead in Ellsworth on Friday at 11:00 a.m.

The Downeast Sunrise Trail (aka Calais Branch Corridor Rehabilitation Project) was an interagency effort between MaineDOT and Maine Department of Agriculture, Conservation and Forestry’s (DACF) Bureau of Parks and Lands (BPL). MaineDOT owns the rail corridor and the BPL managed the construction, and will oversee continued maintenance of the multi-use recreation trail. The project has received support from several community partners and recreational groups.

“This is an example of Maine state government working with community partners to complete a project that will generate substantial economic activity and support Maine as a year-round destination,” said Governor Paul R. LePage. “The ATV and snowmobile industries alone bring in over $500 million dollars to the State each year. Add to that the revenues that flow from its multi-use design and you have a significant resource for Maine people, visitors and the businesses that cater to them.”

Department of Agriculture, Conservation and Forestry Commissioner Walt Whitcomb and MaineDOT Commissioner David Bernhardt stressed the economic, recreational and its connection to the countries transportation system.

“Residents of Ellsworth and visitors will now have the opportunity to use a trail which directly links the City to the 87-mile recreational trail system,” said Commissioner Whitcomb. “This is an easily maneuverable trail with gentle grades and a smooth solid base, which will provide users with the opportunity to engage in exercise to improve cardio-vascular health and reduce obesity. This trail links to 800-miles of ATV and snowmobile trails including ITS 81 and 82.”

“This new trail, part of Maine’s transportation network, will encourage trail users to visit Ellsworth’s local restaurants, lodging facilities, fuel stations, merchandise sales and other services,” said Commissioner Bernhardt. “Having the trail head in the City of Ellsworth will entice tourists to visit this unique trail system. It is also is included in the East Coast Greenway which runs from Calais, Maine to Key West, Florida.”

The project, begun in 1987, has been an interagency effort between MaineDOT and the DACF’s Bureau of Parks and Lands. It has been constructed in two phases.

Phase I – An 85- mile rail trail from Washington Junction, Hancock to Ayers Junction, Pembroke, opened in September 2010.  This project preserved the rail corridor for future rail use, while in the interim providing a multi-use rail trail connecting multiple communities. The DACF was the lead agency in constructing this phase of the DEST.  Construction of the trail was paid for with proceeds from the sale of the rail steel.

Plymouth Engineering designed both Phase I and Phase II.  Lane Construction was the contractor for Phase II.

Numerous organizations and area clubs worked to make this project possible. These include:

The Sunrise Trail Coalition, Inc., which represents the interests of the Trail multi-users, and through its membership dues, donations and grants sponsors annual community events and provides necessary accessory facilities like benches, picnic tables along the Trail.

The Acadia Area ATV Club, which owns property with plans for a clubhouse in Hancock near the parking lot, entered into a trail use agreement which allows the trail to be built on their property.

The Ellsworth Snowmobile Club will take care of grooming this section of the trail. The club will be working along with the Frenchmen’s Bay Snowmobile Club to assist with development of snowmobile access into and around Ellsworth area, with some trails already in place.

Future maintenance and upkeep is being done by these clubs and managed by the DACF Off-road Vehicle Office. Clubs involved in maintaining the DEST from Ellsworth to Ayers Junction: