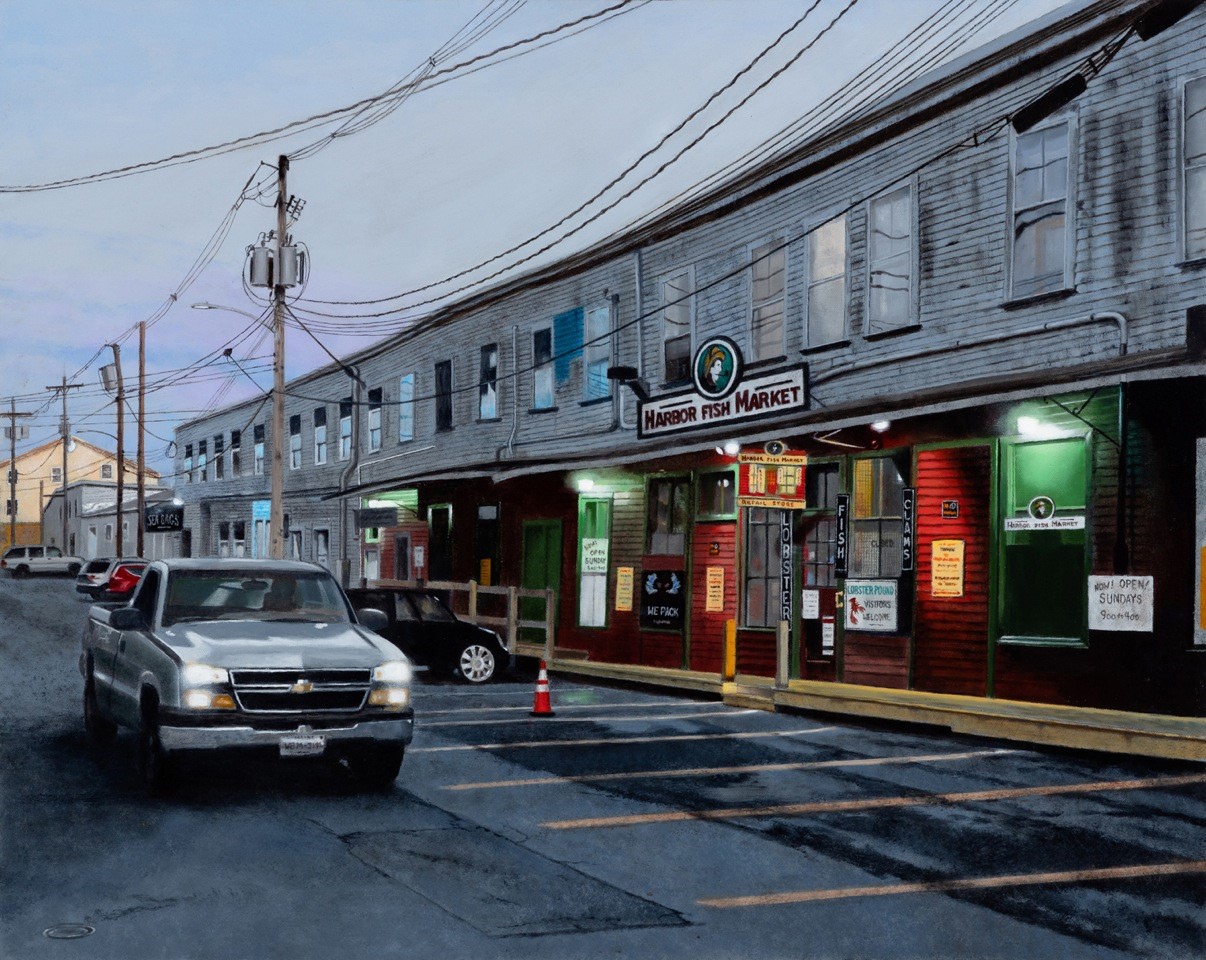 Courthouse Gallery Fine Art is pleased to present two new exhibitions: Downeast Narratives: Philip Barter and Matt Barter, and Clarity of Vision: Sally Ladd Cole and B Millner. The shows are on view at the Gallery through July 10, or virtually on their website at www.courthousegallery.com.

Philip, who born and raised in Boothbay Harbor, Maine, has painted Maine for over five decades. In the early years, Philip has worked in all manner of traditional Maine jobs to support his family of seven. He dug clams and worms, was the sternman on a lobster boat, did carpentry, and dragged for mussels. By the 1990s, Philip was able to paint full-time after the Bates College Museum of Art acquired his work for their permanent collection and mounted a retrospective of his work in 1992. Philip’s work was subsequently highlighted in Downeast magazine and acquired by the Farnsworth Art Museum and the Portland Museum of Art.
Matt, who was raised in Franklin, Maine, learned to paint under the guidance of his father. He sold his first painting at age ten, and by his teens was learning the mechanics of oil painting and making his own wood reliefs. His carved fishermen and wood reliefs are fast becoming a signature motif. Made from reclaimed wood beam and oil paint, his rough-cut figures capture the brawn of these weathered men laden with lobster traps, hoes, buckets, and buoys.

This father and son pair has lived their lives immersed in art. They share an eye for composition, shape, and color, and a deep-rooted connection to Maine that makes their work authentic. Philip lives with his wife, Priscilla, in Franklin, Maine. Matt lives with his wife, Rebekah, and their two sons in Brunswick, Maine.

Clarity of Vision: Sally Ladd Cole and B Millner highlights recent work by realist painters Sally Ladd Cole and B Millner, both of whom are new to Courthouse Gallery. Cole is a realist marine and landscape painter who depicts the rural gems she encounters near her homes in Maine and New Hampshire. Many of Cole’s paintings highlight the Atlantic shoreline where she finds an abundance of inspiration in the overall natural grace of these endangered vistas. Cole’s work has been included in numerous solo, juried, and groups exhibitions throughout New England. Her work has been highlighted in several publications and books, including Summer Colonies; Dublin and Cornish, and Isle of Shoals: Island of Light. In 2019, Cole received an award for Best of America Exhibit from the National Oil and Acrylic Painter’s Society at Park City, Utah. She also placed third in the 2019 Annual Juried Exhibition at The Guild of Boston Artists in Boston, MA. Cole holds a BFA from the University of New Hampshire. She studied with Clifford Smith and T. Allen Lawson. She is an active member of the American Society of Marine Artists. Cole splits her time between her homes and studios in New Hampshire and Blue Hill, Maine.

B Millner’s oil paintings approach photorealism and include interiors, landscapes, waterscapes, and cityscapes, frequently nocturnal. Millner favors character over beauty and likes to convey a certain grittiness in his paintings. A native of North Carolina, he is a graduate of Davidson College (Economics and English) and the University of North Carolina (MBA). For over twenty years, Millner participated in studio classes at the Virginia Museum of Fine Arts Studio School. He also took foundry courses at Virginia Commonwealth University, the number one ranked sculpture department in the United States. His work, which has been exhibited in galleries from Maine to Louisiana and in Anguilla, BWI, can be found in numerous private, corporate, and institutional collections, and has been selected for several national juried exhibitions. Millner has been coming to Maine since 1995, and splits his time between Bailey Island, Maine, and Virginia.

Courthouse Gallery is located at 6 Court Street in Ellsworth. For more information on upcoming shows call 667-6611, or visit www.courthousegallery.com