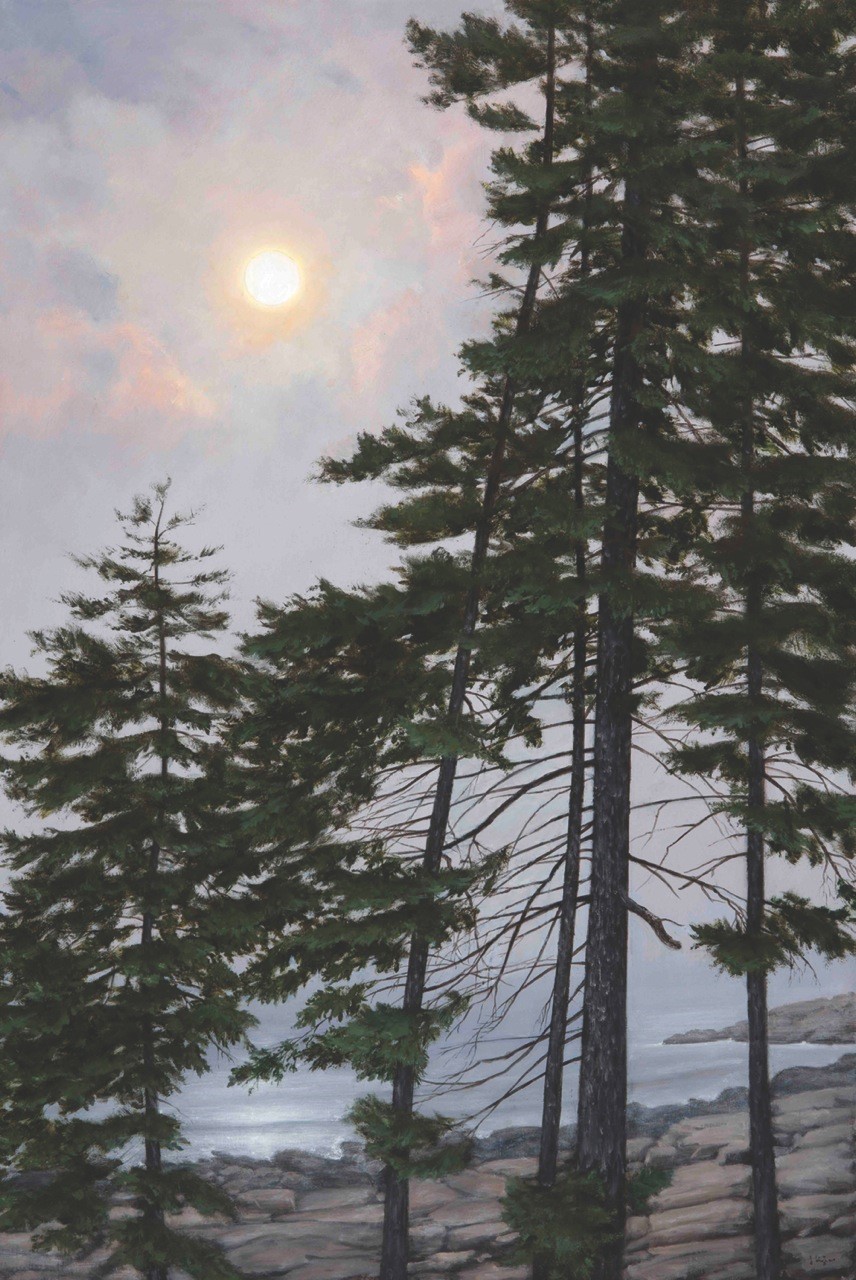 Ellsworth Courthouse Gallery Fine Art is pleased to present three solo shows: Jeffery Becton:
New Work; Joseph Keiffer: Places Remembered; and Linda Packard: Fruitful Wanderings. There
will be an artist’s reception on Wednesday, August 15 from 5–7pm. The shows will run from
Augsut 15 through September 15. The event is free and open to the public.

Courthouse Gallery is located at 6 Court Street in Ellsworth. For hours call (207) 667-6611, or
visit www.courthousegallery.com

Jeffery Becton (b. 1947) creates provocative photo-based digital montages based on the
tidal reaches and atmospheric weather near his Deer Isle home. A pioneer in the field
of fine-art photography, Becton began experimenting with the layering of visual
information in the early 1990s using the new digital tools. His surreal scenarios are
evocative of that in-between milieu one inhabits when living by the sea. Bates College
Museum of Art held a solo show of Becton’s large-scale monographs in 2016 that
then traveled to the Daura Gallery at the University of Tennessee, the Vero Beach
Museum of Art in Florida, and to Lynchburg College in Virgina. Becton’s work has
been in numerous solo, group, and juried exhibitions, featured in national and
international publications, and is included in many private and museum collections,
including Bates College Museum of Art, Farnsworth Museum of Art, and Portland
Museum of Art, among others.

Joseph Keiffer (b. 1952) is a realist painter who credits the artists of the Hudson River
School for his inspiration, yet his sensibilities are completely modern. Keiffer takes
the viewer from brilliant sunlight to twilight, from panoramic vista to cozy interior,
and from plastic pots brimming with splashy annuals to towering stacks of tipsy tin
cups. He studied at the New York Studio School and graduated from Brandeis
University with degrees in philosophy and art history. Following a year at Sotheby’s
“Works of Art” course, Keiffer was employed by Sotheby’s as a cataloguer and
appraiser of paintings, and after six years there, and three years at Doyle Galleries, he
became a private art dealer and president of a non-profit art foundation. In his thirties,
Keiffer began painting full-time. His work is in numerous national and international
collections. Keiffer, who lives in New York City, finds inspiration for his painting by
spending time in downeast Maine and the Catskills, NY

Linda Packard: (b.1952) is an en plein air landscape painter, who recently transitioned
to a totally process driven studio practice. The new abstract paintings in her first solo
show at Courthouse Gallery have brought the sensuous physicality of her visceral
landscapes to a new level. After receiving her BA in Studio Art from Smith College,
Packard moved to Boston where she worded as librarian and a printmaker,
and studied book arts. She eventually settled in Maine and opened a graphic design
firm. In 2006, Packard returned to pursuing a fine art career. A one-week summer
workshop with the late Boston painter, Jon Imber, in Stonington, Maine, marked the
beginning of her love affair with the expressiveness of oil paint and en plein air
painting. Packard spent five years working with Imber, who she still cites as one of
her greatest influences. Packard was awarded a Heliker-LaHotan Foundation
residency fellowship in 2015, and participated in a month-long residency this past fall
at Weir Farm in Wilton, Connecticut. Packard lives in Bangor Maine, where she
maintains a year-round studio.