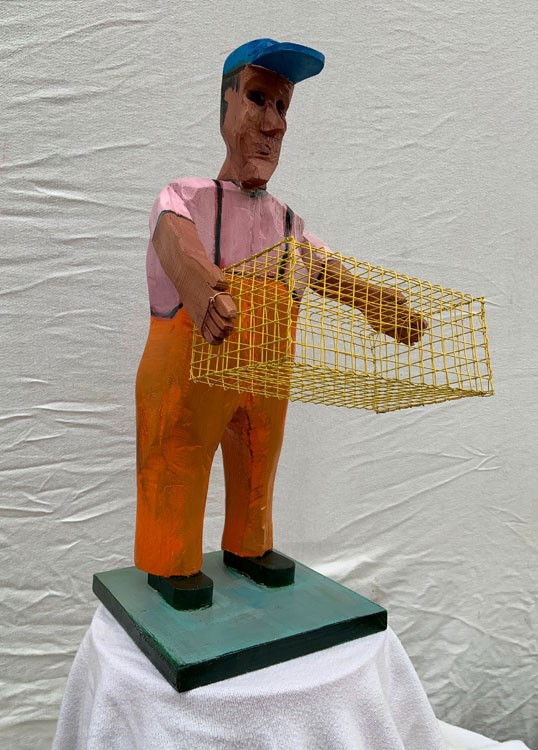 Tom Curry, who works in oils, pastels, and more recently egg tempera, is best known for his paintings of Chatto Island, which sits across from Center Harbor in Brooklin, Maine. Curry is captivated by Maine’s atmospheric changes and how they affect a scene. He credits Claude Monet as an important influence, among others. Like Monet’s series of Haystacks, Curry depicts the passage of time through changes in the weather. This investigation has led Curry to paint the same view of Chatto Island for nearly twenty years. Curry holds a BFA from the Rhode Island School of Design. He lives in Brooklin, Maine.

Matt Barter, who was born and raised in downeast Maine, is a self-taught artist. His father Philip Barter, also a self-taught artist, mentored his son and taught him the mechanics of painting. Barter also worked with his father at a young age on various commercial fishing boats, fishing for lobsters and harvesting mussels, traditional Maine vocations that influenced Barter’s style and became the focus of his work. Barter is most interested in telling a story with his work trough various mediums—painting, wall-reliefs, sculptures, and carved figures. His work was selected to hang in the office of Angus King in Washington DC, and has been highlighted in several publications, including Downeast Magazine, and Maine Home + Design. Barter and his wife Rebekah, and their two sons, live in Brunswick Maine.

Kevin Beers is an en plein air painter, who grew up in Hudson Valley, New York, an area with a rich history of landscape painting. As an art student, Beers was drawn to landscape painting and the powerful realism of Edward Hopper, Rockwell Kent, and George Bellows, despite being encouraged by his professors to pursue abstract painting. Beers eventually became an art director at a Manhattan ad agency and lived in Brooklyn, NY. One summer, Beers visited Maine, seeking out the very places Hopper, Kent and Bellows painted. For several decades thereafter, Beers traveled to Maine every summer to paint Monhegan Island, becoming one of that island’s most recognizable artists. In addition to landscape painting, Beers is known for his paintings of cars and trucks, mostly faded, cast off relics. “Portraits” he calls them. Beers’ truck paintings have been featured in American Artist Magazine May 2000, Automobile Magazine June 2001, and Sports and Classic Car June 2001. Several years ago Beers his wife Amy moved to Maine full-time where they settled into a spacious nineteenth century sea captain’s house in Thomaston.

Courthouse Gallery is located at 6 Court Street in Ellsworth. For more information on upcoming shows call 667-6611, or visit www.courthousegallery.com