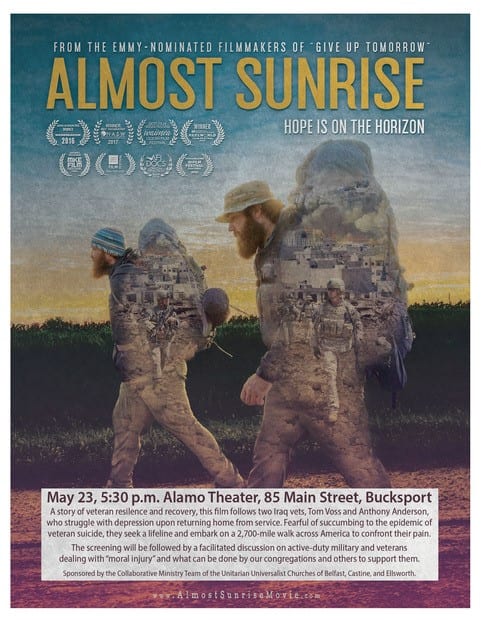 Bucksport – The Collaborative Ministry Team (CMT) of the Unitarian Universalist Churches of Castine, Belfast, and Ellsworth are sponsoring a showing of the film Almost Sunrise at the Alamo Theater in Bucksport on Thursday, May 23, 2019. This film is a 2016 American documentary film directed by Michael Collins and produced by Marty Syjuco. The event will begin at 6 pm with conversation, followed by the documentary at 6:30 pm. The Rev. Al Boyce will be present following the film to answer questions. This event is free, although a $5 donation would be appreciated. The Alamo Theater is at 85 Main Street, Bucksport.

Almost Sunrise is a story of resilience and recovery. A feature-length documentary, the film follows two Iraq veterans, Tom Voss and Anthony Anderson, as they struggle with depression upon returning home from military service. Fearful of succumbing to the epidemic of veteran suicide, they both seek a lifeline and embark on a 2,700-mile walk across America as a way to confront their inner pain. The film captures an intimate portrait of two friends suffering from the unseen wounds of war as they discover an unlikely treatment: the restorative power of silence and meditation. A cinematic experience that juxtaposes the internal struggles of its characters against the wide-open spaces of America’s heartland, Almost Sunrise is also the first film to explore “moral injury:” the profound shame that many veterans feel when their experiences of war violate their moral beliefs, and a possible critical factor in veteran suicide.

The Rev. Al Boyce is a Unitarian Universalist minister who works with veterans coping with moral injury. While related to trauma, the concept of “moral injury” is distinct from the clinical diagnosis of PTSD. The Moral Injury Project, housed at Syracuse University, describes the term as referring to “the damage done to one’s conscience or moral compass when a person perpetrates, witnesses or fails to prevent acts that transgress their own moral and ethical values or codes of conduct.” While moral injury may manifest in different individuals in diverse ways, it can be broadly understood as a profound, ongoing, internal battle: an injury to a person’s soul. As journalist Diane Silver has described it, moral injury is “a deep soul wound that pierces a person’s identity, sense of morality and relationship to society.” Only by healing that soul wound can moral injury, in turn, be healed. As a result, veterans suffering from moral injury are often not helped, or not helped enough, by the kinds of therapies and interventions that treat PTSD.

Almost Sunrise Will Be Shown at the Alamo Theater

This event is free, although a $5 donation would be appreciated. For additional information, contact Colin at [email protected]

Rudman Winchell is delighted to announce a new attorney.
Array
Log in